ArchipelagoDAO: Your token is your ticket to paradise

$6 million dollars to purchase Cebaco Bay off the coast of Panama, a remote island with a 2200ft air strip, 2 artesian wells pumping 25,000 gallons a day EACH, with the intent of auctioning the 12 titled lots suitable for villa construction to members of the DAO. Membership to the DAO is obtained with the purchase of an ARCH token. Citizens of the DAO are members that have at least 100 ARCH tokens staked in the DAO liquidity pool. I need feedback on how to scale the tokenomics, the goal of ArchipelagoDAO is to leverage the equity in the shared island real estate portfolio to be able to purchase additional islands with the intent of preserving them for future generations.

Cebaco Bay off the coast of Panama

A sizable piece of this tropical haven is now available, 7,410 acres of freehold land made up of almost 5,000 acres of mature forests and 2,500 acres of established plantations filled with native hardwood trees — representing a net present value of USD 5,000,000 for the wood and a harvest value of more than USD 15,000,000. Three camps with facilities for more than 120 workers are on site, but currently only 15 people reside in them. The property also includes two residences: a four-bedroom beach house with sweeping ocean views on the island’s Playa El Cedro, and a three-bedroom house on the mainland located about 500 feet from Playa Reina, locally known as a good surfing beach. Approximately 378 acres, encompassing the best beachfront and viewpoints of the property, have been divided into 22 lots for development and are in the titling process. If these parcels were sold, they could conceivably generate more than USD 10,000,000.

I was the dude who was leading the effort of Island DAO, but failed at the auction, just like Constitution DAO, but didn’t get any press. 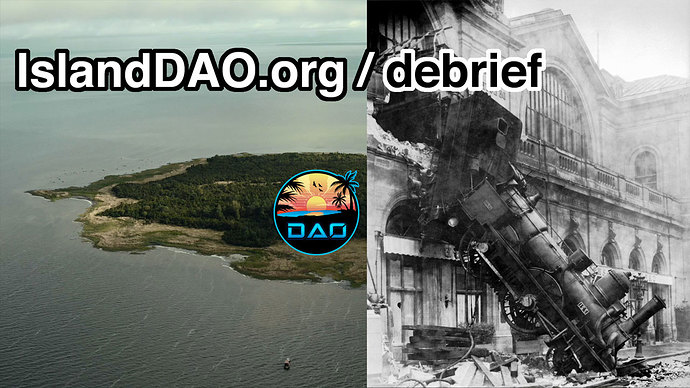 I thought I know better.

I thought I will connect members of other communities.

…well that is simply not the simplest vision to communicate (hahahaha)

I have some legal infrastructure, “Island DAO” is officially registered as a non-profit association and I may as well roll with it.