Hi everyone, thank you for the opportunity to speak about the Gig Protocol.

An EVM compatible protocol for the gig economy.

The centralized corps that define the gig economy are at odds with their own communities — both their workforce and their clientele. Uber and Lyft employees seem to be perpetually on strike against low pay and bad working conditions. Airbnb and contracting services like Fiverr take very large fees that force users to transact off-platform. What’s clear is that the honeymoon phase of the gig economy is over and as reality sets in the relationship between platform and user is becoming increasingly forced , stale , and ripe for disruption .

Although there is plenty of griping within the current gig system, it is still a growing and widely used industry. To challenge its supremacy we must reinvent the primitives — the foundational elements on which it was built.

At its most fundamental, the gig economy is a series of escrow contracts for services rendered.

If driver A delivers passenger to designation B then pay out driver.

A decade ago, when the gig economy began, this was quite a challenging task involving the coordination of payment processors and secure backend applications. But, with the advent of Web3 , where payment processing and security are inherent to the stack, we can much more elegantly build out the necessary components for escrow services. This gives us an opportunity to reframe the fundamentals of the gig economy with a focus on composability.

Rather than build in a single vertical, such as ride share or rentals, we are constructing an escrow primitive . It will become our base unit, on top of which we can both rebuild existing gig verticals as well as open the door for new creations previously, unimaginable in the world of Web2 .

To understand the needs of our market and iterate on our underlying service, we’ve chosen to begin by applying our escrow protocol to a single vertical we are calling Good Morning. Good Morning is focused on building an elegant UX for contract jobs paid out in crypto.

Kleros has some great code for Escrow but we believe they lack the UX and multi-chain support to make it as useful as it could be. Our initial focus will be to build a fork of Kleros supported on low tx chains like xdai and Polygon with a super clean UI. Here is an image of one of our UI views we are working on. 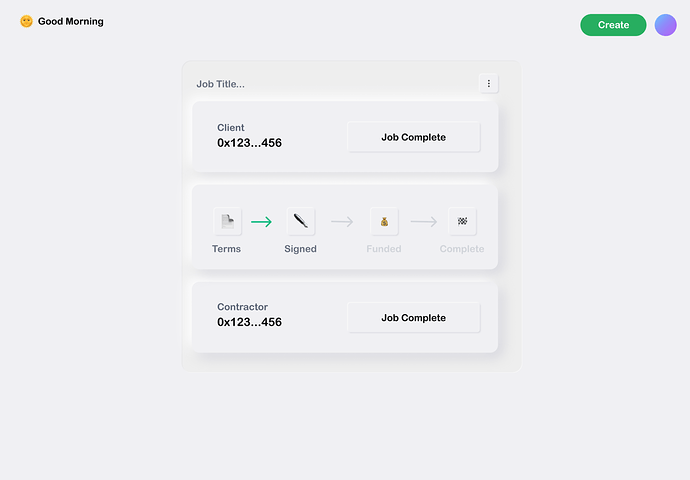 Gig Protocol has outlined our UI design language and has a basic architecture in place for UX.

Gig protocol is unlike other escrow services because we are focused on building tooling on top of which gig verticals can easily be built.

Gig Protocol has taken 0 funding to date. It has all been built out of pocket and bootstrapped by Jacob.

The requested funds will serve as a bridge to launch the new, ready-for-prime-time version of Good Morning escrow Dapp. Expenses include:

We would like to invite any and all community members who are interested in contributing to reach out in the comments below or message Jacob directly on Discord Jaacob#1962.

Why are you building this alone ? What does your community look like ? How do you think about scaling operations once/ if this does start to get traction ? What’s your end goal for Gig Protocol ?

Thanks for the interest Yalor!

At its most fundamental, the gig economy is a series of escrow contracts for services rendered.

We (LexDAO) also are looking at Etherising it, most contracts require legal personhood, we at LexDAO believe that under the right circumstances (professional indemnity bond) we can allow anonymous or more correctly authorNyms to be a party. We’ve even done the legalese but its all manual at mo, no UI/UX