Kyndr - Crowdfunding for the decentralized web.

We are a DAO on the Ethereum network that helps facilitate seamless and transparent interactions between Donors, Social Causes & Impactees.

Kyndr is a crowdfunding protocol built to enable social impact at scale while offering financial transparency in the giving ecosystem. The protocol will be governed by a DAO and allows causes to transact with end beneficiaries using a sovereign currency pegged stable token backed by donations received in a bank account maintained in the country of operation and verified by the Chainlink Proof of Reserves function. The protocol is free to use for all while Supporters & Causes earn $KYNDR, a rewards & governance token powering the KYNDR DAO for participating in the ecosystem.

Our Vision is to unlock the massive amounts of impact capital locked away by enabling trust, transparency, and accountability in global giving.

Crowdfunding is broken, and Kyndr is here to fix it. We are reimagining the crowdfunding ecosystem to modernize everyday giving. Legacy systems are flawed and prone to malintent which has caused a general consensus of mistrust in the space. Data from public surveys & annual giving reports stress the importance of innovation and infrastructure to enable transparency and accountability in giving. We want to activate domestic capital in each geography that exists in plenty to go towards causes they care about but with trust and accountability in the mix. This cannot be done by humans, but by code that is self-governing. We aim to do this by creating an ecosystem that leverages blockchain and its apt qualities, enabling causes to transact with real-world end beneficiaries where all transactions are updated in real-time on an open ledger, reimaging impact measurement, reporting & transparency for supporters.

Currently, several blockchain-based SPOs ( Social Purpose Organisations) use tokenomics as a model, which is great on paper but is flawed in reality. The end beneficiaries who receive the tokens are affected by its volatility and in turn, affect the purchasing power of the cause and consequently a dilution of impact. On the other hand, Blockchain SPOs, the likes of Binance charity ensures that the funds in BUSD (Binance USD) donated to the organization are shown on the block explorer transparently but not how the funds were used as the cause then converts it back to fiat. This is not true transparency and leaves room for discrepancies once converted to fiat. This is a major problem more so in developing nations as systems are outdated and are prone to corruption.

Kyndr offers a FREE-to-use tool for supporters to donate with financial transparency & organizations/individuals to avail funds for their cause. The Kyndr DAPP allows causes to get access to dashboards & tools to manage & communicate impact to investors thereby enabling trust and accountability to their supporters to build meaningful supporter-cause relationships.

The protocol creates synthetic assets backed by donations received in a trust as fully collateralized stable tokens verified by Chainlink Proof of Reserves function. The trust is specific to the location of the cause. (Eg: KiNR, KUSD, KAED) This is to ensure purchasing power is not affected by the volatility of crypto assets and adheres to local regulation & ease of use. The amount donated is converted to tokens worth the exact amount in fiat value of the local currency and sent to the cause’s wallet. Causes can transact with KYC’d beneficiaries for payments that are visible to all on a public ledger. The end beneficiaries who receive the tokens can convert the tokens back to fiat. Tokens that get converted are burnt & the beneficiary is settled instantly using Bank transfer/UPI/other centralized finance protocols once KYC’d. In essence, $KINRs can be viewed as digital promissory notes or IOUs to the token holder. This method is also preferred to using just CBDCs in the framework as CBDCs are prone to centralized validators that open up the possibilities of security risks, attacks and manipulation. 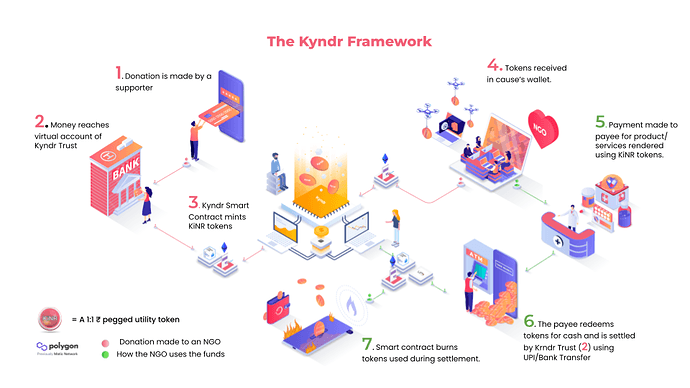 KyndrDAO also governs the protocol - A DAO consisting of all stakeholders in the ecosystem. $KYNDR is the token that powers KyndrDAO. Supporters get rewarded $KYNDR in proportion to their donations & Causes get rewarded $KYNDR for communicating impact to the supporters (Proof of Impact). Kyndr has allocated 30% of total supply of $KYNDR as impact farming to reward supporters and causes. DAO members can create proposals and vote on the same: Soft consensus would be achieved through a forum and hard consensus on Snapshot.

The following are the Proposal Pools & their quorum weight requirements:

Unlike other Blockchain based SPOs we have a foundational base protocol that enables “true end-to-end” transparency in the donation life cycle. By establishing the NPP, we are able to also create an entire ecosystem that is sustainable and generates revenue for future operations. This will be governed and overseen by a DAO to ensure community decision making going forward while acting also as a vetting mechanism for causes applying to raise funds on kyndr. This is explained in detail in our litepaper below.

Currently Kyndr is being built by 2 core team members:

We have an additional 3 members that are contributing to Kyndr from across the globe for back-end, front-end and socials.

No funds will be allocated to team members and will be used solely on building out Kyndr.

Funds: Kyndr was given a $5k grant from polygon and Chainlink has allocated resources to build out the proof of reserves function for the Kyndr dApp.

Help: We require help with community building & structuring or intros with individuals who can help us out with the same.