I won’t be recapping the shitshow in the group chat but I think we can all agree it surfaced the issues that have been bubbling below the surface for a while now, here’s a few:

The issues seem so numerous a number of members declared it is best we either fork or dismember the DAO altogether & return the remaining funds.

I personally disagree. I think what made MetaCartel great was the community itself, not the grants program.

However, I also think we failed at scaling the community bonds as we were onboarding new people & projects. Highly doubt newer members are as connected or aligned with OGs, same goes for newer grantees. We claimed grant is a small part of our value-add & the bigger one being the signal, support from other members, expertise etc. - but was it? Sure some grantees came purely for signal but I didn’t really see us provide much to grantees beyond a grant. Maybe we should cull membership & stop accepting new members for a bit? Maybe grantees shouldn’t join the DAO by default but only upon building rapport by reporting their progress back to the community?

Looks like having 2 grant-giving systems running in parallel is a given at this point. Not a bad thing imo.

a) Decomposition - Gut the Chili & spread the seeds

First one is decomposition of MetaCartel into the community which kind of already happened through OGs starting their own DAOs - this would be taking it a step further by having funds follow the workforce.

b) Disintegration - Gut the Chili & give back the seeds

From my understanding, this would simply imply ragekicking everyone & giving the eth back to the people that pledged it.

Main problem with 1. is that we might simply not have enough people willing to work on it.
I took time to write this post because I care about MetaCartel but I still won’t have time to contribute more than say 1h/week & I suspect vast majority of members are in the same boat.

MetaCartel lives on through the people & DAOs it incubated as well as remains a part of the DAO history.
Even if it is to decompose or disintegrate, it will still live on in this way.
But, should it disintegrate?

What do you think we should do?

Let’s come together as a community at least for the one last time & try to figure this out.

First of all, nicely done with the post pETH! Thank you for your thoughtful explanation of the Telegram conversation shit-show, and for providing potential solutions.

From my purview, I think MetaCartel would benefit significantly from creating (reviving, if previously existed?) working groups. There is, clearly, a lot of work that needs to be done – and a lot of people who could do it-- but a lack of organizational structure to get the ball rolling and to keep the ball rolling.

MetaFactory is a great example of a DAO that thrives on the working group structure, as is Wildfire. The value of creating small autonomous pods of people with common interests and skillsets, seems like a no-brainer. It could activate the potential energy, currently laying dormant, in the vast talent that we have in this group. Plus, the concept of “bridge-builders” / “roaming wizards” that connect the dots between working groups and also the broader DAO ecosystem, is already well established in Spicy DAOs.

I agree with you that better communication (and perhaps also direct reaching out) to dormant members is critical right now. Keeping these members in the loop via the newsletter and MetaMedia (maybe even personal emails for OGs who have poured a lot of sweat previously) will help to awaken the bears and get us the momentum and excitement that we desperately need.

Here’s the article I wrote that digs deeper into the value of working groups in autonomous and anarchic orgs. 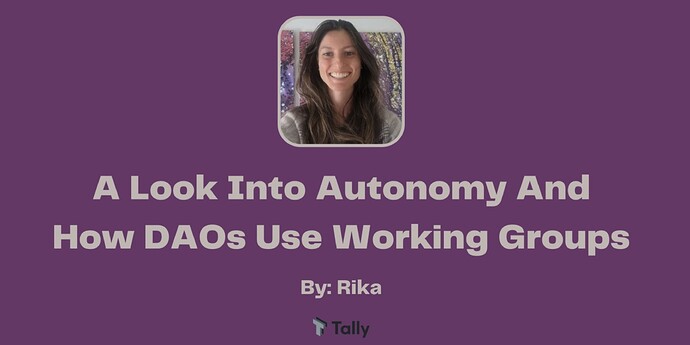 A Look into Autonomy and How DAOs Use Working Groups

This article is inspired by a tweet where I asked: What about DAOs do you want to learn more about? What are your burning questions?

This is something we want to help ease for organizations creating an impact in the world as MetaCartel. Operational headaches are obstacles that are common in every organization, no matter the size. You can’t avoid this, but you can actually “control” it by hiring the best people for the task. Web2 companies may have a structure to make things happen in the smoothest way possible, from departments dedicated to every part of the organization to income streams that fund the operations expenses. Web3 organizations lack this “Income Stream” so they can take care of the “Operational Overheads” that come with running a Decentralized Organization; Kokonut DAO fixes this.

Hello Cartelians! I’m Wasabi, founder of Kokonut Network. We at Kokonut have been analyzing the “sustainability” of organizations that do public goods like MetaCartel, Social Impact DAOs, NGOs, and Grant Giving Communities. That has been very important to us, even before we became MetaCartel members, and we want to do something about it. Due to the nature of our project, we are in the perfect position to offer a permanent solution to the treasury’s sustainability while increasing the grants-g…