We would greatly appreciate community feedback on the following: 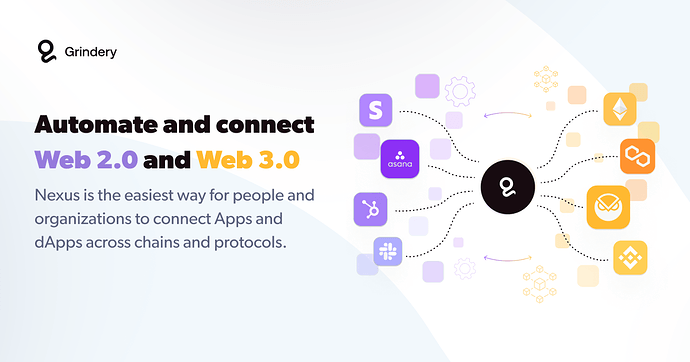 A framework that allows developers to create reusable services to connect smart contracts with other protocols, including web2 Apps. A low/no-code interface that allows end-users to declare workflows with simple logic, making automation available to...

Grindery (BinanceLabs S4 startup) is building the Zapier for Web3, a low-/no-code middleware for Web3.

Since its formation in the beginning of 2022, we have assembled a team of talented developers and serial entrepreneurs to build Grindery - the Zapier of web3. As a BinanceLabs Season 4 incubation startup we received funding from the following investors: ANKR, Dharmesh Shah (Founder & CTO of Hubspot), Harmany, Algorand, Near, Flow, Cronos.

The Grindery team proposes to build an integration between MetaCartel & Qwestive so that MetaCartel can improve engagement and participation within the DAO. Qwestive is built for NFT collections but Grindery can expand functionality for MetaCartel and Qwestive and integrate both with each other.

Tim Delhaes: CEO/Product
Tim is a serial entrepreneur who has built, sold, and crashed multiple start-ups in South America and Silicon Valley. Over the last eight years, Tim has also led the journey of the agency group called Inboundlabs from a three-person team to a leading HubSpot partner with over 500 customers.

David Semakula: Lead Developer
David Semakula is an experienced full-stack developer working with grindery on all things web3 and integrations.

Joe Hu: Full Stack Dev
Joe has been a professional full-stack developer for more than 10 years. He started working with Tim and Christian at InboundLabs from the beginning of its operations. Joe has massive experience on building sites and custom integrations on HubSpot. He loves solving problems and working on code.

Egor Milyukov: Full Stack Dev
35 year old full stack developer with 11 years of development experience. He has worked with Tim and the Grindery team since 2019. In the most recent couple of months, Egor has been working on more of the front-end of Grindery integrations.

Quick question: what kind of data will Grindery collect and from where?